Think those ivy-covered towers are pretty? Unfortunately, English Ivy (Hedera helix) is one of the most pernicious, nasty, and destructive of the invasive plants because it not only destroys native habitat, it can also destroy your house.

That is why I’ve added English Ivy to the Most Hated Plants list.

We can thank some very early European colonists for bringing this plant to this country in their quest to create welcoming landscapes that reminded them of their home far away.

It continues to be sold in Home Depots and nurseries across the country for exactly the reasons that make it so invasive: it grows quickly and requires absolutely no maintenance. This makes it very convenient for Home Depot to continue to sell this plant even though it is destroying native ecosystems across the country. (I continue to dream that Home Depot and every store like them will wake up to the consequences of their actions, silly me). 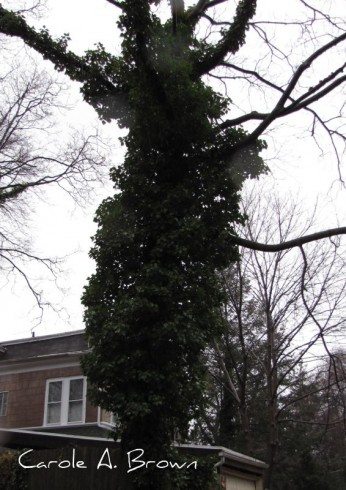 Hedera helix grows by spreading runners which climb over and smother anything and everything in their path including buildings, shrubs, and trees.

If you’re a homeowner, you REALLY do not want this plant climbing up your walls. The rootlets will burrow into masonry, eventually weakening them to the point of collapse. On wooden siding the dense cover retains moisture, which causes fungus and decay, while the rootlets pry apart siding and eventually rip your outer walls apart.

As a ground cover, the quick growth and dense cover shade out native plants and suppress their growth. In tree canopies, the enormous weight of the Ivy will eventually topple each tree. The rootlets burrow under the bark, causing fungus and decay while creating opportunities for disease to enter. English Ivy is dangerous because it can spread very quickly through native woodlands, both by it’s creeping runners, and seed dispersal by birds who eat the berries. As it spreads, native species are lost and biodiversity is reduced until we are left with a very simplified ecosystem or monoculture that is unable to perform all ecosystem services which are essential to wildlife and human survival.

Every spring I fight what feels like a losing battle chasing down ivy runners that have sprung up in my garden because this plant is in every yard that surrounds my yard. It really makes me kind of cranky because while my neighbors are doing no maintenance of their properties, I am doing constant battle to keep this plant out of my yard.

Leave Us Your Comments Below!

Click the Submit Your Comments button below to leave us your comments or questions!

I have English ivy as it controls erosion on a slope that runs toward our house and covers stumps of trees that were removed, but I do control it and trim it. Do not have near the house

as it does damage the siding. I will be out this week doing my cutting back of ivy. It is fine if you control it and keep it from wandering without control. Also do not let it wander into a neighbor's yard.

Hi Ivy is not just a danger to the environment it is also killing trees and here in N Ireland three men have been killed by trees. One def ivy infested The other tree fell on a police car in Aberdeenshire again ivy infested. google tree kills man in Aberdeenshire. I have hundreds of photos re this. Ivy kills trees three ways. The weight of it on the branches if you can imagine your arm holding a weight well sooner or later that will bring your arm down. The weight will also bring the tree down if the tree is growing at an angle. It gets over the canopy and stops the tree photo. And last but now least the ivy acts like a sail Please please keep it out of your country it will destroy everything

Further to the excellent post below by Michael, a well known British authority on English wild plants and trees is the Woodland Trust in the UK. From their English Ivy page:

“ Clingy, luscious, misunderstood. Ivy has long been accused of strangling trees, but it doesn’t harm the tree at all, and even supports at least 50 species of wildlife.”

That said, English Ivy is a nightmare if as I do, you have a neighbour(s) that does not maintain their yard and lets their ivy grow over to your side. I have a cherry tree that is beginning to have ivy on it’s top branches spreading from my neighbour’s yard (he has ivy growing 30 metres in the air over trees and the boundary fences are covered in it). I am disabled so have to employ contractors to control the ivy from my side - he is an aggressive neighbour and threatened me when I complained his ivy was destroying my new fencing. It is a constant source of grief - my neighbours ivy has destroyed 3 boundary fences over the past 6 years that I have had to replace costing hundreds of pounds along with repairs needed to a greenhouse where the ivy roots are now growing under the ground from next door. Add that to out of control bramble and elder! As soon as I trim it back, new growth appears in days. I can not use poisons as we have too much wildlife in our garden.

I completely empathise with the OP but it doesnt destroy trees and is actually very beneficial for wildlife - it does however, destroy buildings, fences, sheds and smother and eventually kills plants and bushes as it blocks out the light and cause mildew/mould to develop.

English ivy: much misunderstood, it doesn’t kill trees (see Woodland Trust web site), but you wouldn’t want it attacking your house! It is, however, a wonderful haven for birds and insects, also providing a fantastic food source for the honey bee. Don’t kill it unless you really have to: just spend some time observing the comics and goings of nature: you’ll be captivated.

Danielle
by Danielle
This plant is my nemesis!

Excellent post. Not only is this plant invasive, trying to curb it's spread by clipping and axing and sawing results in a poison ivy-like reaction -- yes, from this plant. The rootlets can get so large when they've grown out of control that they can be (no exaggeration) the size of my arm, 4 or 5" in diameter.

I am really pleased when I come across an article like this one. Ivy can be a blight and a plague when it runs wild.

Many Americans are unaware that that nearly all of your precious woodland is at risk from this pernicious plant. At a time when remaining natural forests are under threat from overuse, pollution and other threats it is tragic that the threats from invasive species are not taken seriously.

I live in Northern Europe where English Ivy is a native species and it will not usually invade the heart of a healthy forest, but when running wild in a favourable climate it can ruin priceless woodland ecosystems. Even in England ivy wreaks havoc on urban trees and all but the healthiest and most biodiverse ecosystems.

My message to those who defend the cultivation of Hedera Helix or English Ivy; you are depriving future generations of what should be a Priceless National Asset.

Mark
by Mark
English ivy is too pervasive

The English Ivy sounds like a good ground cover at first. Give it a year or two and you will regret planting this species. For lack of a better term, it “attacks” everything around it. Even if you do eventually cut it back, it leaves its nasty “tentacles” on almost any type of surface, which you cannot power spray or sand away. This is a beautiful plant at first, but it will take over and destroy other plants, walls, etc. I strongly suggest you not to introduce this plant to your garden and home.

What spray should I use to get rid of English Ivy

I don't know why everyone is afraid of IVY! There are many other vines and ground covers that should be feared. I have Ivy. I find it to be manageable. Morning glory on the other hand, you will NEVER control. The seeds blow all over the place, and you will find them sprouting all over your lawn, cracks, gutters, you name it. Ground covers!!! These I fear. They grow over night! I do a cleaning today, and in two days, it's as if I had nothing. The Ivy though, unless you plant it and never touch it, grows at a normal pace. I trim it today, and it's good for a few weeks, and even then, it's not attacking everything like people say. I live in Chicagoland though, so maybe it is a different animal in the south. I don't know.

NativesOnly
by NativesOnly
English Ivy, The Worst of the Worst in the Southeast

There are many terribly invasive non-native plants that have been introduced to the Southeast, from Chinese Wisteria to Autumn Olive, but English Ivy may very well be the worst. In many regions of the Southeast you can't find a vacant property or large area of undeveloped land(State Park, NWR, National Forest etc.) without seeing English Ivy growing, often times with reckless abandon. The plant is simply taking over, unchecked, putting millions of acres of biologically diverse land in danger of becoming monocultures. I can only hope and pray that states in the Southeast begin to ban this terribly destructive plant sooner than later. Regardless, once Pandora's Box is opened, there's little to nothing that can be done to effectively eradicate such plants.

This is not about poison ivy, its about English ivy, it has thick waxy dark evergreen leaves that do not absorb herbicides. It is very labor intensive to get rid of. its also a mosquito factory and will eventually kill or at least cause a great deal of stress to even the largest of trees.

I am not an advocate of using poison in my yard; however, I always make an excepetion and use round up for poison ivy. It sounds like you need to try it for your ivy problem. It kills the roots and you will have no more runners popping up in spring. It will be gone. Goats are a great organic solution if it is feasible for you.

I have never understood all these hate articles about ivy. I find it completely harmless and it gives deer something to eat in the winter. I have it on my house and it has done no damage at all.